The War of the Worlds Original Broadcast 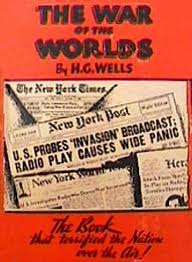 The War of the Worlds Original Broadcast

Topics
Great Speeches and Interviews, The Mercury Theatre on the Air, The War of the Worlds, science fiction

First Broadcast 73 year ago on October 30, 1938 by The Mercury Theatre on the Air

When first broadcast, some listeners heard only a portion of the broadcast, and took it to be an actual news reports. Newspapers reported that panic ensued, people fleeing the area, others thinking they could smell poisonous gas or could see flashes of lightning in the distance.
Source: The War of the Worlds (October 30, 1938)

Music includes Don't You Ever Let Nobody Drag Yo's Spirit Down - Linda Tillery & the Cultural Heritage Choir, Suicide is Painless - Mike Altman, usa for africa - we are the world, Purple Haze - Jimi Hendrix, Big Rock Candy Mountain - Harry McClintock, Upside Down - Joe Higgs, In the Blink of an Eye - Ryan Harvey, Larry David- Earth to America, What a Wonderful World - Louis Armstrong, George Carlin - Faith Based, We Shall Overcome - Guy Carawan, The Mooche - Duke Ellington & His Orchestra, Requiem For A Dream